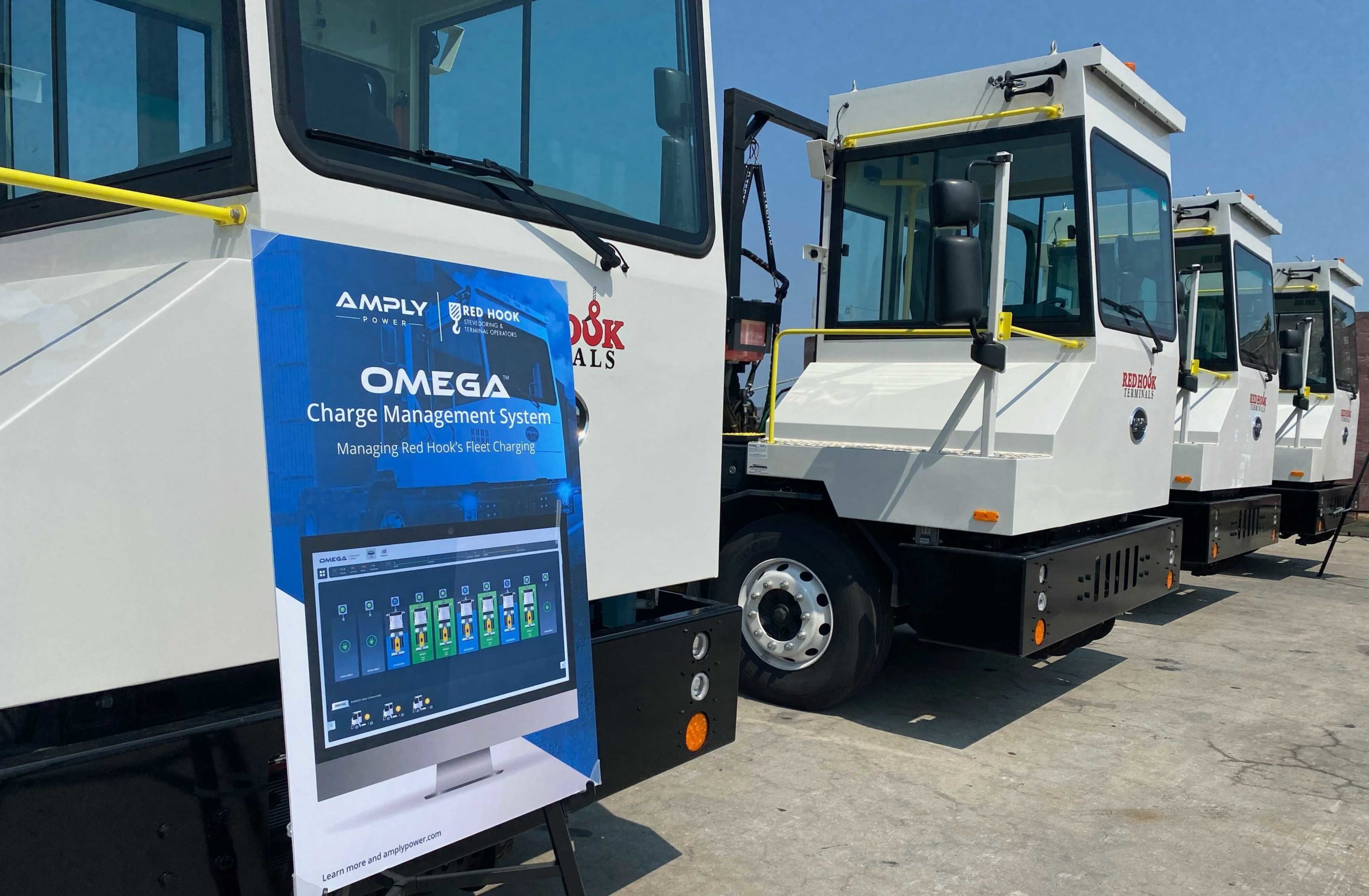 The heavy-duty zero-emission battery-electric yard tractors are being used to move cargo containers at the Red Hook Marine Terminal in Port Newark and are also being used for making runs to the other terminals at Port Newark and Port Elizabeth and run to the Millennium Marine Railyard. Red Hook operates the cross-harbor barging operation that eliminates tens of thousands of truck trips per year off the roads of New Jersey and New York and so the deployment represents the most recent example of Red Hook’s continuing leading role in the fields of port-related environmental stewardship and global sustainability.

CCMT is partnered with Hudson County Motors, Inc. in Secaucus, New Jersey, one of the largest truck dealers in northern New Jersey, and the first BYD Motors truck dealer in the nation. BYD Motors is the leading electric truck and bus manufacturer in the world, with over 14,000 battery-electric trucks and 65,000 electric buses deployed worldwide. BYD has US factory operations in Lancaster, CA, and a regional service and parts center in Lodi, New Jersey. Warren Buffett’s Berkshire Hathaway Energy is BYD’s largest institutional shareholder.

The BYD model 8Y yard tractors being deployed by Red Hook Container Terminals LLC are third-generation equipment that comes with 217 kWh lithium iron phosphate battery packs that have 241 horsepower and are capable of pulling loads of up to 102,000 lbs GVWR. They can operate continuously for up to 12 hours or more before recharging or can operate 24/7 with opportunity charging during shifts. AC and DC charging is available. DC fast charging takes approximately 2 hours from a 20% state of charge. Early operational results indicate that the yard tractor can operate two whole shifts before needing re-charging.

The charging operations are being handled by AMPLY Power, a comprehensive electric vehicle charging and energy management provider for fleets. Red Hook Terminals is leveraging AMPLY’s cloud-based charge management system, OMEGA, which ensures the vehicles are ready to go at the start of each shift and automatically optimizes charging schedules for the lowest-cost energy. Cost-optimized charging improves total cost-of-ownership by keeping fueling costs low and predictable. BYD and AMPLY Power announced a preferred partnership in 2019 to streamline EV infrastructure and energy services for fleets. Red Hook’s fleet of electric tractors is one of many that BYD and AMPLY Power are collaborating on.

“Improving air quality in communities already overburdened by pollution while we reduce the vehicle emissions that fuel climate change is a priority for Governor Murphy, who has made climate action an imperative across all state agencies,” said the New Jersey Department of Environmental Protection Commissioner Shawn LaTourette. “DEP is proud to be a partner in Red Hook’s historic deployment of battery-electric trucks and we encourage others to follow their lead because we can only confront the climate crisis and improve public health through collaboration and partnership.”

“These zero-emission electric yard tractors do not represent the finish line as far as meeting the seaport’s goal to reduce emissions. But it’s a major step forward,” said Sam Ruda, director of the Port Department of the Port Authority of New York and New Jersey. “It affirms both that the technology is developing rapidly and is applicable to container terminals, and it underscores the role the public and private sectors are playing in making it a reality. Electrifying these yard tractors is strong evidence of how the Port Authority and its partners are moving forward to reduce emissions impacts from cargo operations.”

Red Hook Container Terminal LLC President & CEO Mike Stamatis said: “Red Hook has always taken the health of the communities it operates in, its workers, and the planet seriously. Our Cross-Harbor Barging Operation between our facilities in Port Newark and Red Hook Brooklyn remove an estimated 30,000 truck trips off of New Jersey and New York City streets every year, reducing local diesel truck air pollution in the community and C02 emissions in the atmosphere. It is both cost-effective and environmentally sustainable. We are now going to the next level by eliminating diesel air pollution and CO2 emissions at our Port Newark facility that we expect will benefit our neighbors in Newark, our workers, and the planet. This project was a long-time in the making and a large investment, but it is an investment we believe will return dividends in terms of public health, operational costs, and efforts to save the planet. This is a giant step for Red Hook and we hope others will take giant steps because now is the time to join the fight against climate change. We greatly appreciate our partners at the Port Authority, the New Jersey Department of Environmental Protection, Climate Change Mitigation Technologies LLC, BYD Motors Inc., and Hudson County Motors who helped make this day a reality.”

Climate Change Mitigation Technologies LLC Vice-President & Chief Operating Officer James Sherman said:
“The year 2021 has shown the world that the planet is in a climate emergency and we are in the race of our lives to save the planet for our children, their children, and for the love of nature and life here on earth. There is a long, steep road to go, but history will record that, for marine terminals in the eastern United States, it started here at Red Hook Terminal Port Newark in 2021.”

“It has been said that leadership is about knowing the way, going the way, and showing the way. I would like to congratulate Mike Stamatis and his Red Hook team for knowing, going, and showing the world one of the best ways that marine terminals can have an immediate impact in their local communities and the global fight against climate change. The zero-emission battery-electric yard tractors deployed at the Red Hook Container Terminal can perform the most demanding duty cycles in the Port without polluting local communities or the planet. I want to thank our partners at the New Jersey Department of Environmental Protection, Hudson County Motors, BYD, and RSM Construction Group, all of whom collaborated to make this project a reality.”

Paul Rypkema, Jr., President, Hudson County Motors, said:
“We are proud to partner with Red Hook Terminals, CCMT, and the NJDEP for the deployment of the 10 Zero-emission BYD Yard Tractors. Red Hook has been very focused on “going green” and Mike Stamatis and the Red Hook Team have spearheaded this effort with passion and determination to make New Jersey a cleaner place to live. It has been a pleasure working with the Red Hook team to ensure that this transition from diesel yard tractors to Zero-emission electric is seamless. We look forward to working with all for years to come and thank them for the opportunity.”

Aaron Gillmore, Vice-President of Electric Trucks, BYD Motors, said:
“Thanks to the collaborative efforts between Hudson County Motors, Climate Change Mitigation Technologies, and Red Hook Container Terminal CEO Mike Stamatis, BYD Class 8 Electric Yard Trucks are hard at work at Port Newark’s Red Hook Container Terminal. BYD brings a combination of innovative and safe battery technology and the experience of over 14,000 successful deployments of heavy-duty electric trucks worldwide to the Garden State of New Jersey. We are proud to be here, and proud to be part of the clean energy transition benefitting the Newark community and contributing to better health for workers.”

Vic Shao, CEO of AMPLY Power said:
“Electrifying vehicle fleets is complex and we applaud the Red Hook team for their leadership. We are proud that our charge management platform, OMEGA will ease Red Hook’s transition to EVs by optimizing the charging of their yard tractors to minimize energy costs and maximize vehicle uptime,” said Vic Shao, CEO, and founder of AMPLY Power. “We’ve been working with BYD with joint customers for close to three years and we are pleased to be partnering with them again on this historic heavy-duty tractor deployment with Red Hook Terminals.”

Andrew Genn, Senior Vice-President of Ports & Transportation for the New York City Economic Development Corporation said:
“Adopting EV technology to improve air quality and reducing carbon in the supply chain was a key goal of Freight NYC. We applaud Red Hook Container Terminal in leading the way for a cleaner and greener supply chain in the New York and New Jersey region.”

Red Hook Terminals LLC is a multi-faceted marine terminal developer, operator, stevedore and operator of the Cross-Harbor Barging Operation with three facilities in the Port of NY/NJ complex and operations in Freeport, Texas and Baltimore, Maryland. With cargo handling capabilities and productivity second to none in the Port of NY&NJ, Red Hook Terminals is able to handle any type or size cargo. Whether it is a bulk commodity such as aggregates, steel or lumber, reefer cargo, containers, yachts, heavy lifts, autos, high and heavy (lolo and roro), OOG or special project cargoes, Red Hook Terminals is uniquely positioned to serve the needs of our customers. Red Hook is also leading the way in the development of and use of clean energy and technology, such as the largest dedicated off-shore wind port project in the Port of NY/NJ to serve the needs of the emerging off-shore wind industry in the United States, and the first and largest deployment of heavy-duty zero emission yard tractors along the eastern seaboard of the United States and the first at a Port of NY&NJ marine terminal.

AMPLY Power is a comprehensive electric vehicle charging and energy management provider for fleets operating trucks, buses, vans and light-duty vehicles. Our intelligent charge management software, OMEGA™, optimizes charging for lowest cost energy, while offering improved resilience and reliability, all in a user-friendly dashboard. Paired with our Charging-as-a-Service model, our vehicle and charger agnostic approach allows us to handle all the details of charging a fleet’s EVs, guaranteeing performance and dramatically reducing upfront capital. To learn more about AMPLY, please visit www.amplypower.com or LinkedIn and follow @AMPLYpower on Twitter.

Hudson County Motors, located in Secaucus, N.J. has been a leader in the Zero Emission truck category since the effort has started. It is the first BYD truck dealer in the country and its affiliate, United Ford, offers Ford and Lightening E-Motors vehicles to round out the zero emissions vehicles in all categories. Hudson County Motors’ new facility is electric certified and ready to assist with any size transportation project. With its partnership with CCMT, Hudson County Motors can assist in obtaining funding for Zero Emission vehicle purchases. For more information regarding a variety of applications including sanitation, yard tractors, short and long-haul tractors, vans, and buses, please contact Tom Del Gaudio, New Vehicle Sales Manager at tdelgaudio@hudsoncountymotors.com

About the Port Authority of New York and New Jersey:

2021 marks the Port Authority of New York and New Jersey’s centennial year. The bi-state agency builds, operates, and maintains many of the most important transportation and trade infrastructure assets in the country. Founded in 1921, the agency’s network of aviation, ground, rail, and seaport facilities is among the busiest in the country, supports more than 550,000 regional jobs, and generates more than $23 billion in annual wages and $80 billion in annual economic activity. The Port Authority also owns and manages the 16-acre World Trade Center site, where the 1,776-foot-tall One World Trade Center is now the tallest skyscraper in the Western Hemisphere. The Port Authority receives no tax revenue from either the states of New York or New Jersey or from the city of New York. The agency raises the necessary funds for the improvement, construction or acquisition of its facilities primarily on its own credit.